Ketanji Brown Jackson, President Biden’s first Supreme Court pick, has been sworn in as the 116th justice. She is the first Black woman to serve on the nation’s high court.

The ceremony caps a months-long process that essentially began February, when President Biden, fulfilling a campaign promise to nominate the first Black woman to the Supreme Court, announced Jackson, 51, as his pick to replace Justice Stephen Breyer, 83. Breyer — whom Jackson clerked for after she graduated from Harvard Law School in 1996 — officially retired Thursday, paving the way for her to be sworn in.

“For too long, our government, our courts haven’t looked like America,” Biden said when he nominated her. “And I believe it’s time that we have a court that reflects the full talents and greatness of our nation with a nominee of extraordinary qualifications and that we inspire all young people to believe that they can one day serve their country at the highest level.” 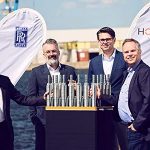