Kore, an energy startup in California, has developed a new way to produce hydrogen from biogas, and is now poised to build a commercial-scale demonstration facility in Los Angeles. It said half of the carbon in the feedstock can be converted into gas, while the other half can be converted into solid elemental carbon char.

California is a prime location for biomass conversion, as the primary feedstock is plentiful. Kore has partnered with Southern California Gas to develop a commercial-scale demonstration facility in Los Angeles.

The US Department of Energy has a goal of $1/kg of hydrogen by 2030. So many companies are aiming towards that. 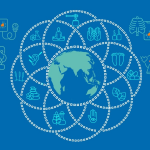