Naganathi originates in Amirthi near Jawadhu Hills in Vellore and flows 30 km through the district before its confluence with Kamandalanathi at Sambuvarayanallur in Tiruvannamalai.  By the turn of the century, the river started drying up and villages and towns along its banks started facing acute water shortage, making them dependent on bore-wells. At some places even a 500 feet borewell did not fetch water.

In 2014, Art of Living Foundation, an NGO, launched a ‘Naganathi River Rejuvenation Project’ to improve groundwater table, and revive the river. Conservation of rainwater began and recharge wells, known as urai kinaru, were sunk. “Five wells were sunk at Salamanatham in Vellore in 2014 on pilot basis. An impact study two months later revealed that groundwater table and water level in farm wells rose to a 10-year high,” Chandrasekaran Kuppan, director of the project and an Art of living teacher, told TNIE.

With this success, Under the MGNREGA an army of women workers was raised to sink the wells on the riverbed. The wells, 20-foot deep and six-foot wide, designed to collect water from rivulets formed during the rains, thereby raising the water table. 354 recharge wells were built in 24 panchayats in the Kaniyambadi.

The same river-rejuvenation model is being implemented in the State’s nine other districts – Ranipet, Tirupathur, Tiruvallur, Sivaganga, Dindugal, Krishnagiri, Tiruppur, Coimbatore, and Salem – by engaging over 42,000 workers, largely women. So far, 5500 wells have been sunk under the project. 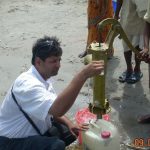 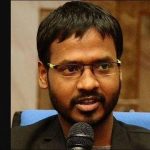