The garden isn’t just green with plants; it’s also environmentally maintained, getting its irrigation water from the store’s dehumidification system—water which would have been discarded anyway. The lush outdoor space also serves as a habitat for birds and bees. 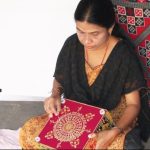